Rhys is one of 3B Survey’s newest staff members, having started his career with us at the start of 2019. He had a year of previous industry experience after completing his TAFE Surveying qualifications in 2018.

Rhys has quickly established himself as a key member of the survey team and has significantly expanded his knowledge of surveying through exposure to several large onshore and offshore projects.

First project for 3B was in Israel on the Tamar platform for Noble Energy, performing a variety of dimensional surveys for spool/valve replacements along with short surveys in northern Italy on the spool / valves themselves to ensure correct installation offshore.

3B have been involved in many projects during my time but my favourite project would have to be the Leviathan project for Noble Energy. A large variety of knowledge and skills were needed to complete that project from start to finish and it was a high stress environment well equipped in testing your ability to work under pressure without hindering the quality of work. The job was completed without issues and ‘til this day still stands as a milestone in my surveying career due to the experience and knowledge I learnt during that project.

The international travel by far takes the cake as the best part of working for 3B, not just saying I’m a surveyor but to say I’m a surveyor that has so far worked in 4 different countries on 3 different continents is crazy considering my age, and that number will only grow over time.

My goal here at 3B is to develop my knowledge and experience as a surveyor and further expand on the possibilities and limitations set on surveyors in general. As technology and the industry grows, I too want to grow with it and stay ahead of the game. The constant change and growth in this field is what has drawn me to it and it will continue to be the factor that drives me to go to work every day. 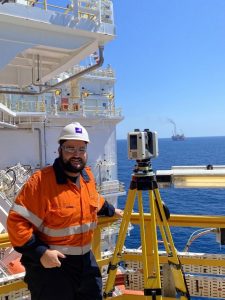