As one of 3B Survey’s most senior staff members Mark has been working with 3B since he made the move to Perth with his family in 2012.

He started his career as an apprentice Draughtsman in his hometown of Middlesbrough, UK were he competed his apprenticeship and gained invaluable experience in steel fabrication along with piping spools on North Sea assets which set Mark up in his career with skills he still uses to this day. Before joining 3B Survey in 2012 he had previously worked on major worldwide projects including places such as USA, Egypt, Qatar and South Korea, utilising skills in both Surveying and 3D Laser Scanning.

I am passionate about my job and thrive on new challenges, I am always looking to expand my skillset and learn new aspects of the job as technology advances. I think my favourite part of the job is knowing that over 20 years of experience is being passed on to our new apprentices and that by mentoring them I am  helping them learn and broaden their skills as future Surveyors.

The first project I worked with 3B in the North West Shelf on the Pyrenees (FPSO). This was to replace all the piping down in the engine room of the ship. This was a challenging and tiring job dur to the extreme heat in the area.

I have worked on numerous projects while I have been working for 3B. I have to say my favourite one was the Leviathan for Noble Energy, this was pre COVID and was fabricated throughout the world. This project was fabricated primarily in USA which I visited frequently but also took me to various places across the globe including, Singapore, Netherlands, UK and Israel.

One of the best things is travelling and visiting places in the world that you would never get to go to even though we never get to see much of them. Although this is challenging being away from home, it gives you ideas to visit these places again on vacation with the family. I like that we mix up our work between office and travelling.

Eventually I would like to move into a team lead position with a few surveyors and apprentices working under me so I can guide them along in the right direction and pass on my extensive survey knowledge. I also want to keep moving with the latest technology and up to date equipment and software, so I don’t get stuck in my old ways. 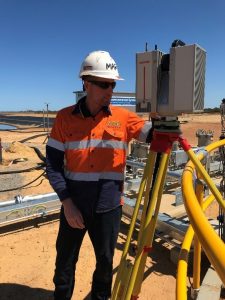